Vapor from e-cigarettes is much safer compared to traditional cigarettes. It causes no discolouration or staining to our teeth whatsoever. 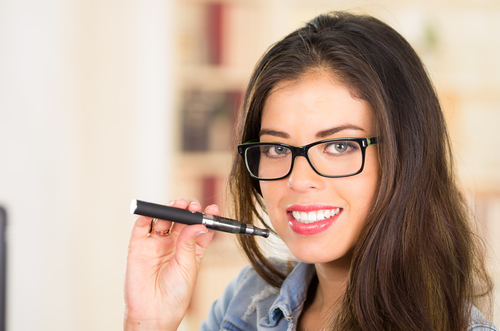 In a recent study, scientists conducted an experiment by exposing enamel to the smoke from burning cigarettes and electronic cigarettes. This is one of the first investigations to determine the different effects of these products. Not surprisingly, researchers have discovered that the enamel which has been exposed to vapour from electronic cigarettes are stained no more than the teeth of non-smokers.

Whereas smoke from cigarettes causes a very significant stain and discolouration just after two weeks of exposure. This study is quite concrete, as the conditions of a human mouth were also mimicked. The enamel which was used in the experiment was extracted from cows and then soaked in a saliva solution to form the layer which surrounds our teeth.

There were, however, some negative effects found from electronic cigarettes as well. One of this is that vaping caused gums to recede due to the presence of nicotine. Nicotine restricts the supply of blood flowing to the gums, thus causing nutrients and oxygen supply to be reduced. This inhibits the mouth’s ability to fight against potential bacteria. Note that all the negative effects from the vapour produced by electronic cigarettes are all due to nicotine, whereby it is present in cigarettes as well.

We are, however, able to conclude that vapor from e-cigarettes is much safer compared to traditional cigarettes. It causes no discolouration or staining to our teeth whatsoever.

Like all other aspects of human health, vaping has its own sets of side effects which may be harmful, but it is a huge improvement compared to smoking traditional cigarettes.

Dr. Dale Brant from Ingenious Dentistry has also stated that vaping tends to cause dry mouth more often, and this may possibly lead to tooth decay.

Another obvious result from electronic cigarettes is that the colouring used in e-juices may sometimes cause temporary staining to both teeth and gum. E-juices come in a multitude of colours, and some of these colours are very bright and light as well. This is because food dye has been used in the process, however, the staining is not permanent. Bad breath may occur with vaping as well, again, due to the presence of nicotine. This is not to say that vaping with juices which contain no nicotine is entirely safe.

Without combustion and tar, vaping is touted as the safer alternative compared to cigarettes. There is also no build-up of plaque and tar in the deep recessions of our teeth, as vapour dissipates quickly. Safe to say we can have white teeth and healthier gums again!

The findings from this study are currently published in the American Journal of Dentistry and are one of the official studies which have been accepted by the dentistry community. Another win for the vaping industry.