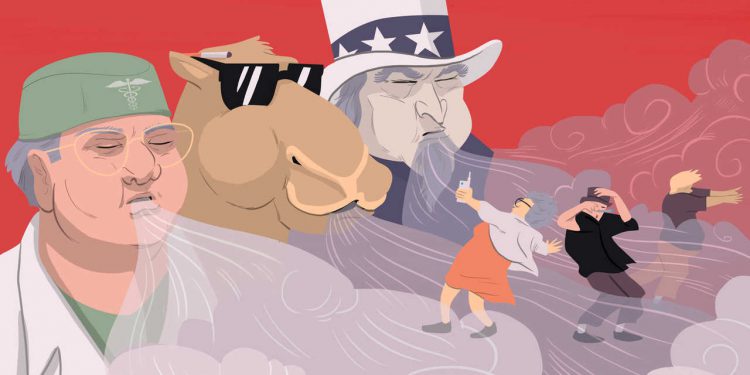 Just in 2018, ten states in the US have legalized marijuana for recreational use. A total of 33 states have already legalized it under the term of medicinal purposes. Conversely, vape-related products are being banned across the country at local, state, and federal levels at an alarming pace.

Scott Gottlieb and the FDA is definitely adding fuel to the fire with their recent attacks on vaping. Meanwhile, there has been no mention of whether or not marijuana has side effects or harmful effects, nor any studies being conducted on it.

San Francisco is one of the most recent ones to pass laws which prohibits the sales of e-liquids in the entire Bay Area. Thanks to the FDA, most of the public now view electronic cigarettes as the equivalent of smoking. Despite bodies such as the US Centre for Disease Control & Prevention had recently released a new statistic indicating that smoking rates are at the lowest point ever, no one seems to care.

The vaping industry gets zero credit for helping to save millions of lives, and even worse still, gets attacked as being cancer causing, bad marketing tactics, causing youth addiction and such. So why exactly do so many politicians and government hate vaping? Three simple words; follow the money. And the money goes right at Big Pharma.

Just like Big Tobacco, Big Pharma has very deep pockets with massive financial reserves. These organizations possess the power to change the world’s perception of anything, with the ability to influence politician and government alike in the form of campaign contributions and lobbyists. Big Pharma had long since known the potential of vaping as a new nicotine delivery system. The only problem they had with vaping was that the pharmaceutical industry already had billions and billions of dollars invested in manufacturing nonsense products such as nicotine patches, gums, sprays, and the likes.

With their marketing, products such as Nicorette Gum and the “patch” by Johnson & Johnson were raking in mountains of cash. The rise of vaping could potentially end these streams of revenue, and that one of the reasons why Big Pharma decided that destroying the vaping industry would be easier than trying to enter it and control it.

33 US states legalize weed for medicinal purpose. As a result, there is no argument to criminalize marijuana any longer, and it has become normalized in the process. Obviously, politicians could care less about marijuana and its uses, but rather the medical excuse which brings in big money for Big Pharma and indirectly themselves.

FDA is a huge hypocrite as well, whereby in May 2018 they had approved an application from GW Pharmaceutical to manufacture and market the first ever CBD based medication, targeted to children. No one seems to be condemning this act of approving a drug for children, and even epilepsy that it claims to cure is very rare. With this act of approval, the floodgates were finally opened. With this new medicinal marijuana being approved, pharmaceutical companies could move on and develop plenty of so-called cures for “diseases” using marijuana and thus make billions of dollars in the process. Other countries are following suit, whereby the whole of Canada has legalized marijuana as well when just 5 years ago, you could end up with a life sentence just for being in possession over a set limit.

Vaping, however, is being banned across the world despite being a safer alternative and the health benefits it provides. Just what could we possibly do to go against such huge corporations?!