By Jason Thing
In Latest News
46
0 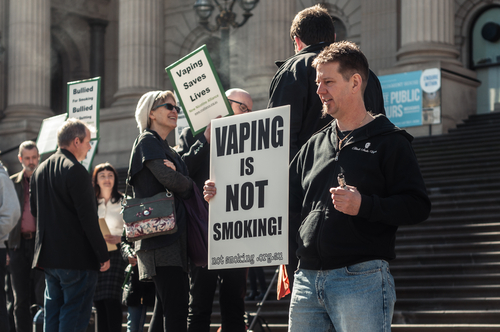 Australia has been well known for treating their smokers as cash cows, with the constant rise of cigarette prices. Just last September, the prices of cigarettes rose by another 12.5%, making a pack of twenties just below $30 Australian dollars.

In New South Wales, a new ridiculous law has been passed which is extremely discriminatory to vapers. This law states that anyone using electronic cigarettes in public places or public transport may face a hefty fine of up to $550.

The ban has been pushed by Brad Hazzard, the Health Minister for New South Wales. Of course, like all ridiculous things, they all have their own set of supporters as well. Advocates of this law have stated that they are afraid of the effects of passive vaping, like passive smoking. It is already a fact that second-hand vapour is not harmful to human health, unlike cigarettes. Many pro-vaping groups are against this law, as this only allows vapers to vape in places where smoking is allowed. It’s like holding an AA (Alcoholics Anonymous) meeting in a pub, making it very ironic.

Most vapers feel that politicians should not be telling them where to vape. There are some vapers who are willing to risk coping the fine and see if they get taken to court. Despite all the compelling evidence regarding the health benefits on vaping, the Federal Health Minister continues to oppose relaxing any law changes for vaping.

It is difficult enough for vapers in Australia with a multitude of laws restricting the vaping industry. Several states have banned brick and mortar vape shops entirely, and sales of nicotine liquid are banned throughout Australia.

Even the Australian Tobacco Harm Reduction Association had released statements saying that there is no health risks from second-hand vapour to passersby. As there are no identified health risks to the general public, vaping should not be subjected to the same regulations as smoking traditional cigarettes. Similar to strong body odour or perfume, this is an issue of nuisance or etiquette, and likewise, should be treated with consideration and courtesy rather than laws and regulation.

Vaping advocates in Australia strongly believe that the government not interested in properly regulating the vaping industry, as they may possibly lose out on billions. One of the biggest income streams for the Australian government is the taxes they get from cigarettes, and the introduction of vaping will definitely pose a threat to that income stream.

Progressive countries such as the United Kingdom are already embracing vaping as the way forward, and the lawmakers there are in the process of setting up guidelines and regulations for the vaping industry. Other countries should be following the UK’s steps in this area, and making vaping a viable alternative for smokers to be able to quit.