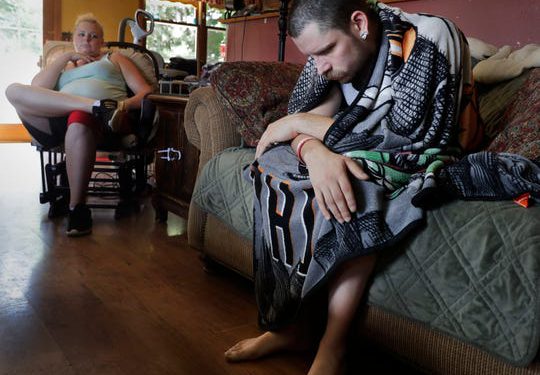 Monday, July 29, 2019 photo, Dylan Nelson, of Burlington, Wis., and his sister, Andrea, sit for an interview. He was rushed to the hospital in June by his sister last month with severe breathing problems. Doctors believe he and about two dozen other young adults suffered serious lung injuries after vaping nicotine or THC, or both. (Photo: Rick Wood, AP)

The news has been spread worldwide stating that in USA 200 cases of vaping-related illnesses have been reported in addition to the death of one person.

Unfortunately, US Federal health officials still did not issue any clear public warning yet, or precise reasons for such illnesses yet, while some state health department and news reports say that this is related to the far riskier practice of vaping marijuana oil rather than nicotine, since the cause of the cases of lung problems involve tetrahydrocannabinol, known as THC, the chemical in marijuana that causes psychological effects.

Marijuana oil vaping (THC) was found in at least 21 cases of severe lung illness reported by the San Francisco Chronicle last week. In Utah – USA, officials said marijuana oil was a likely cause in most cases of lung illnesses in teens. A Wisconsin man had so much trouble breathing after he vaped both nicotine and THC oil, doctors put Dylan Nelson into a medically induced coma and hooked him up to a ventilator to save his life.

Boston University public health professor Michael Siegel said: “Most nicotine-laced liquids in e-cigarettes are alcohol-based and can’t cause “lipoid pneumonia,” the type cited in many of the lung cases. The oil used when marijuana is vaped can.

Also New York University public health professor Ray Niaura said the recent epidemic of lung illness means “it is unlikely it is e-cigarettes that have been on the market for a long time” unless “something was either changed or a new product was introduced into marketplaces.” Niaura is one of the supporter of vaping for smoking cessation by adults if used properly.

Dixie Harris, a pulmonologist at InterMountain Healthcare in Salt Lake City, advises people to avoid vaping THC products — or any vaping product that contains oil — because research suggests that can be a risk factor for lipoid pneumonia. She added, “If somebody is going to insist on vaping, use the products that are from a reputable place and don’t add extra material to your vaping”.

So it is clear that the main advice is: Don’t vape THC oils — especially products that are bought off the street.

On the other hand, Dr. Brian King of the CDC’s Office on Smoking and Health told reporters that harmful ingredients in traditional nicotine vape liquid had been identified that included ultrafine particulates, heavy metals such as lead, cancer causing chemicals, and flavoring used in e-cigarettes to give it a buttery flavor. Those ingredients had been related to severe respiratory illness, he said. While they haven’t been linked to the current cases, “we know that e-cigarette aerosol is not harmless,” said King.

In a statement, Juul said it was monitoring the reports, and added that “reporting also suggests many patients were vaping both nicotine and THC,” and underscores the importance of keeping tobacco and nicotine products away from youth.

“We also must ensure illegal products, such as counterfeit, copycat, and those that deliver controlled substances, stay out of the market,” said the statement.

The vaping industry blamed tainted THC sold by unlicensed retailers, and now we need to see clear and accurate reports from the federal officials to clarify where the problems lie. They need to gather more information about each case, including details such as what substances and products triggered this lung illnesses.

Yet, we should also take into consideration that many of the teens and even some adults are going to be reluctant to disclose their use of THC to their parents or doctors.

Gregory Conley, president of the vaping association, said his group was contacted by a patient with one of the less serious respiratory illnesses who said that he was only vaping THC, but he worried going public would jeopardize his college scholarship!