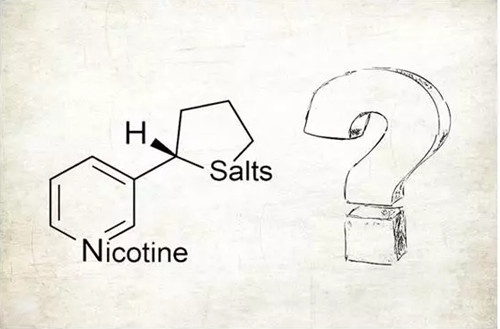 There is a major factor of differentiation between the orthodox “free-base nicotine” that is commonly used in e-liquids, and the recently brought in “nicotine salts”. In layman terms, freebase nicotine is the most pure form of nicotine which is both readily available and used by the majority of e-liquid producers. This kind of nicotine has been in cigarettes since its inception in in 1960 when Marlboro first started using it, but since vapes and e-cigarettes aim to provide a healthier substitute to smoking, the sensible way the producers can achieve this was through the use of nicotine in its best form, as used by all other nicotine replacement remedies.

Salt nicotine, however, was brought into the vaping world in at the end of the year 2015 by a company named JUUL. Its effects, however, are fairly apparent. Employing the benzoic acid catalyst, nicotine salts permit a flatter vaping experience against the conventional free-base, since the alkaline content in it is lowered and prevents a significant knock in the throat. This method allows nicotine induction at a lower potency but a comparatively much greater volume.

Though these salts do have a minor overhead to the traditional methods, the potential shortcomings of the usage of nicotine salts in e-liquids and vaping flavors clearly out-weigh its advantages. Though in regard to health issues, they pose close to zero threats, same as that in free-base, if the addiction due to nicotine content was disregarded, there still are a few pointers to take into consideration.

You still can use pod systems, which I personally prefer due to its ultra small size, that’s making easy to carry and vape discretely, but instead of the nicotine salts, you can use the normal free-base MTL liquids. And here is another article that will explain this: Using MTL Free-Base Nicotine Liquids on Pod Systems Over Nicotine Salts.

To read more details about the topic, please go to: Juul Pods And Salt Nicotine: The Conspiracy And Truth.

What Adds Zing To Vaping?