To understand the basics of e-liquids 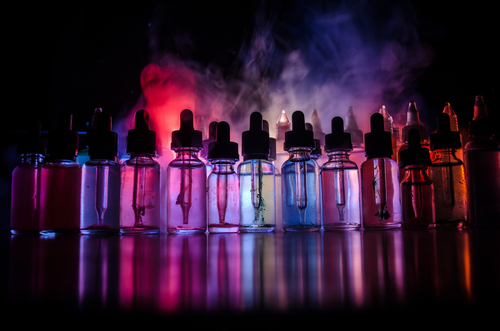 Along with finding the right device, choosing the correct e-liquid can often be overwhelming. Should you use free-base or salt nicotine; Vegetable Glycerine (VG) or Propylene Glycol (PG); what does 0% mean? Well, have no fear. I’m going to give you a run-down on the various different liquids to, hopefully, save you some of the time and money it would take to work it out on your own.

Both types have their advantages: salt nicotine devices produce much less vapor and are therefore more discreet. Free-base nicotine liquids are better for larger devices and health, great if you’re trying to replace hookah. Salt nicotine e-liquids should only ever be used in low-wattage devices, using it in a high powered device can give you dangerously large dose of nicotine, so be careful.

Most traditional e-liquids contain four ingredients: nicotine, flavoring, vegetable Glycerine (VG), and Propylene Glycol (PG). Most manufacturers will use a mixture of both to get the different benefits of each. Often, though, there’ll be a higher concentration of the one than the other.

Below I’ve compared the properties of both, as they would be if not mixed. It’s worth noting that both PG and VG are both considered safe by the U.S. Food and Drug Administration.

To keep it simple, PG takes care of the flavor, and VG takes care of the clouds. PG has a lower viscosity than VG and is therefore easier to handle when refilling and easier to clean out of your tank. The second is that it absorbs flavor much better, allowing for a much more intense taste.

VG is more viscose than PG, allows for much thicker vapor clouds. If you’re trying to replace hookah or just want to play with massive clouds, a VG level in your liquid is going to suit you better. Aside from this, the throat-hit from VG is not as harsh, allowing for smoother vaping.

So, if you are trying to replace smoking hookah (shisha), and you want to enjoy dense clouds with nice flavor, then the best e-liquid for you will be the direct to lung (DL) liquids with ration 70VG/30PG.

While if you are trying to replace cigarettes, then the best option is to go for the mouth to lung (MTL) liquid with ratio 50Vg/50PG. And the MTL liquids comes with either free-base nicotine or salt nicotine, and again I do not recommend salt nicotine.

What do Percentages Mean?

Whenever you see a container of e-liquid, you’ll notice that there’s a percentage somewhere on the bottle. Simply put, this is the amount of nicotine the liquid contains. Sometimes, nicotine strengths will be shown in mg/mL. This shows how many milligrams of nicotine is in each millilitre of liquid. For example, a liquid that is 5mg/mL has 5mg of nicotine for every mL of liquid. Percentages are just another way of showing this. It shows the percentage of nicotine by volume. So, if an e-liquid is 3% that means the bottle is made up 97% ingredients that aren’t nicotine. It’s quite simple to convert this into mg/mL. you just need to times it by ten. so, 3% nicotine contains 3mg of nicotine per mL of liquid.

So now you know the basics. The rest is up to. See which you think you’ll prefer and experiment until you find the right one.

Now, if you would like to know more about the different types of vaping devices, you can read the following article: What To Look For In a Vape.