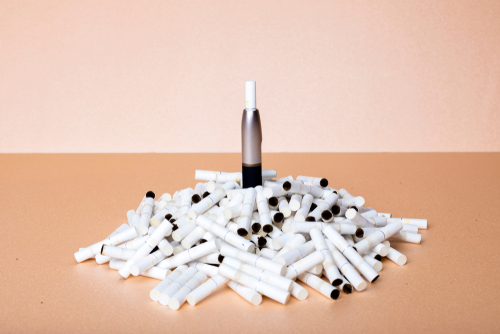 After the peak of vaping just two years ago, market analysts are currently focusing on the poor sales figures and the steady drop of stock value. What is most interesting, however, is the British American Tobacco’s (BAT) comments and actions where they declared that “heat not burn” devices are not a complete solution for smokers. Obviously, this is happening because vaping devices are the biggest threat to the tobacco industry.

The tobacco giants have tried to enter the vaping industry; however, they have not seen good results from doing so. The BAT announced poor performance from their electronic and vaping devices, which knocked off a full 10 percent from their annual revenue target for all newer products. This announcement had sent a crippling effect on their stock values, dropping to their lowest level in four years. Experts and market analysts predict that this decline will continue all the way down to 2008 levels. One of the reasons was because nicotine heating devices have been flatlined in Japanese markets. The tobacco giant said that these heating devices are not a good substitute for smoking, and will not sweep the world as people expect them to.

This is despite the efforts expended by Philip Morris International. They have been criticized for the placements of illegal posters in several shops.

Professional analysts from RBC Europe believe that the future is not so bright for the tobacco industry. Most leading companies are unable to agree publicly on how to market the products or develop it properly. They instead spend plenty of money to enter the vaping industry and make attempts to bring it down. Huge tobacco firms such as Philip Morris are already entrenched in the world of vaping, and control several vaping firms from behind the scenes. One example of this could be seen whereby the BAT was one of the twenty-one companies to receive a warning letter from the FDA, demanding them to come up with an action plan to curb illegal use in youths or risk a ban.

Vaping is facing huge obstacles all around the globe, with tobacco control groups, government, and politicians alike taking significant actions to stop the rise of this new enterprise. Countries, where vaping has been a huge hit, were immediately shut down thanks to the power and influence that Big Tobacco has. This can be seen in countries such as Thailand, Singapore, Malaysia, and Hong Kong where vaping has been banned indefinitely. Even developed countries such as Australia has extremely strict rules on vaping, restricting most brick and mortar shops and sale of nicotine.

There is a small bright side from the FDA’s recent barrage on the vaping industry, whereby if they could come up with a proper set of guidelines and regulations, vaping may be legalized globally and could use the USA’s set of guidelines. We do hope, however, that the American agency will be able to clearly view the benefits of vaping, and how it helps to save millions of lives every year.