Some rules for vaping etiquette

By Dan Richards
In All About Vaping
111
0 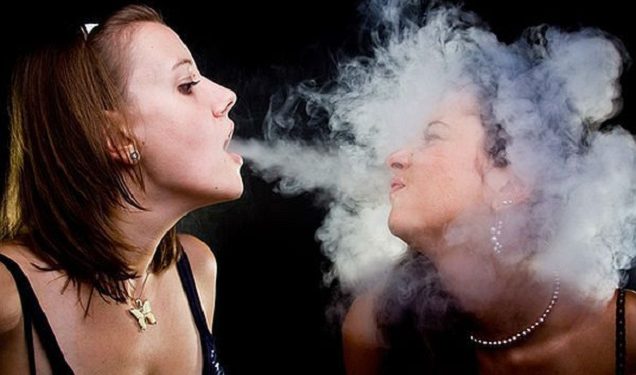 A vaping woman blowing vapor in someone face - Stock Image

Cigarettes stink. The smell gets stuck in your hair and clothes and it can be difficult to get rid of, even after washing. This isn’t the same with vaping. The worst that’s going to happen is a mist of delicious, fruit-flavoured vapour hanging in the air for a few seconds, before it disperses. While this might be much more pleasant than a heavy fog of tobacco smoke, some people don’t like it. We all want to have consideration for the people around us and not be seen as annoying. Here are a few tips about vaping etiquette to help you vape in a way that’s best for you, and the people who share your air.

This is important. If you vape somewhere that it’s illegal, you not only risk being rude but could also face a hefty fine. Vaping is not allowed in most enclosed public places so don’t even think about hitting your vape in the metro station or an airport. If you do, you’re likely to be fined very quickly. Laws around vaping change often, so it’s worth checking regularly to find out exactly what is allowed and where. This is especially true if you happen to be visiting a different country.

Take other people into consideration.

While vaping only produces nice-smelling vapour, that doesn’t mean people want a big cloud of it in their face. If you’re vaping while having a conversation with somebody, make sure to turn away when you exhale. It’s easily done and the person will appreciate it. Often, people will be too polite to tell you, even if your vaping is annoying them, so try to be the one thinking about the effect it’s having.

Are you the kind of person that loves a DTL (direct to lung) vape, and really digs that thick vapour they produce? That’s cool in your own home, but maybe not so much in a restaurant. If you’re sitting in the corner with a fog so thick you can’t see the other customers, they’re probably looking pretty angry with you. It might be worth investing in an extra, smaller vape pen that you can bring when you go out in public to avoid this kind of thing. If you’re aware of your surroundings and always keep other people’s comfort in mind, you shouldn’t have any problems.

If in doubt, just ask.

While vaping might be legal in most cafes, bars, and clubs; that doesn’t mean that you should just go ahead and do it the way you want. Some bar and restaurant owners don’t allow people to vape in their establishments. You can usually tell how people feel, based on how the other customers are acting. If everybody else is smoking or vaping, you should be fine to follow suit. If nobody else is or you’re unsure, just ask. The same goes for your workplace. It’s always better to check with someone before vaping at your desk. The fact is; some places allow it, some don’t. The worst that they can say is no, and they’ll usually thank you for being polite enough to check.