Why You Should Quit Smoking And Start Vaping

A reminder about the danger of smoking and the benefits of vaping as a clean and 95% less harmful alternative! 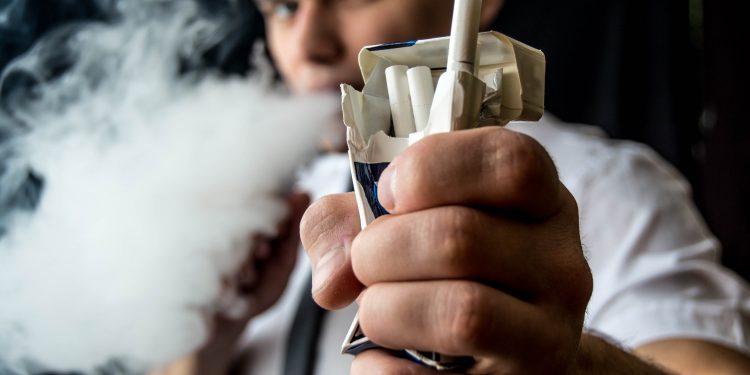 Why you should quit smoking and start vaping.

Behind almost every heart & lung disease is a cigarette; smoking does not only affect the heart and lungs though. Strokes, high blood pressure and erectile dysfunction are just some of the complications that arise from smoking. Around 6 million smokers a year die at the hands of their own bad habits. The World Health organization issued a report on the “Global Tobacco Epidemic” that stated that by the year 2030, tobacco use will cause eight million premature deaths yearly.

On average, your regular smoker meets the angel of death 13 years prior to those who do not smoke. Yes, smoking steals 13 years of life away from you; 13 years you could spend watching your children mature and your grandchildren grow. It should be obvious why quitting smoking is something everyone should consider. However, it’s not happening as often as we’d like. Smoking is not only heavy on your heart, lungs and different organs, tobacco weighs heavy on your wallet.

So why do people are not quitting smoking?

Different studies show that 7 out of every 10 smokers want to quit smoking but are unable to. The same studies show that 55% of smokers had attempted to quit in the past year but were unsuccessful. These high figures tell us that smokers start realizing how dangerous smoking is and attempt to quit.

For some however, that decision is too little too late. As the nicotine courses through your blood over the years, it becomes harder and harder to put the cigarette down. The addiction has more to it than just nicotine, the habit of smoking and the way we have conditioned ourselves to enjoy a cigarette; puff after deadly puff is why people find it hard to quit. Your mind has become accustomed to the idea of inhaling and exhaling smoke.

As technology moved forward, innovators developed a less harmful alternative to cigarettes. The year was 2003 and Chinese pharmacist Hon Lik came up with the very first vaping device known to man. It was only a crude and primitive device, but little did he know, that this would be the spark to light the biggest anti-tobacco movement until date.

Over a decade later, here we are with the most technologically advanced personal vape devices. How will a vape help you curb your nicotine addiction though? Whether it’s your physical need for nicotine that your body just craves or just the feeling of smoke entering and exiting your lungs, modern vaping systems have taken care of that.

To cut it short, if you really want to quit smoking without suffering from the craving either to the nicotine or the habit itself, then the best way is to start vaping.

It’s simple, your mod, vape pen or cig-a-like delivers only the nicotine that you crave. There are hundreds of known & unknown chemicals in a single cigarette (Or coffin nail as some people like to call them). Whereas E-liquid used in most modern vape devices contains only 3  known chemicals. It is an absolute truth that no matter the harm that comes to you from vaping, it is still 95% less dangerous than your average cigarette.

There is a wide variety of choices when it comes to vaping; different devices, smoking techniques, nicotine levels and even flavors; and it all comes down to your own personal preference. Whatever your smoking habits are, there will be a vape for you.

We have created another article that might meet your interest: 30 Reasons Why You Should Stop Smoking And Start Vaping.

Follow us and subscribe now to our blog and social media channels to get updated with all our new posts and articles,  and let us be your guide entering the vaping world.